Near the end of 19th century a group of skilled electricians chartered the International Brotherhood of Electrical Workers Local 26 in Washington, D.C. Since 1892, thousands of journeyman electricians have been trained by the union and have worked on countless projects around our region—from remodeling the White House in 1902 to rebuilding the Pentagon after the September 11, 2001 attacks. 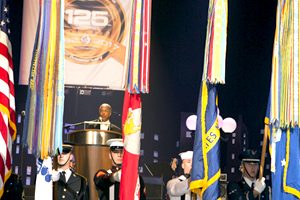 On September 23, 2017 at the MGM National Harbor—built, of course, by 300 IBEW Local 26 members—the union celebrated its 125th Anniversary with a gala. Reaching this milestone gives us a moment to reflect on the impact IBEW Local 26 members have had over generations while building the most powerful city in the world.

IBEW Local 26 members are some of the most highly-trained electricians in the country. The accredited apprenticeship program run by the Joint Apprenticeship and Training Committee (JATC) continues to grow both in quantity of students and state-of-the-art programming that stays ahead of the industry’s demands. In recent years, the JATC added courses including Electric Vehicle Infrastructure Training Program, Programmable Logic Controllers, Photovoltaics, Power Quality, Variable Frequency Drives, Building Automation, AutoCAD, Lutron Lighting Control, BICSI Telecom Certification and more.

President Barack Obama selected the union hall and training facility as the setting in which to host a press conference to announce his plans for a new nuclear facility to be built in Georgia. The hall has welcomed many other dignitaries, such as Congressman Steny Hoyer, Senator Ben Cardin, Senator Bernie Sanders, Secretary of Labor Tom Perez, Virginia Governor Terry McAuliffe and Maryland Comptroller Peter Franchot.

Finally, many IBEW Local 26 members give back to their communities through annual food drives, winter coat drivers, fundraisers and pro-bono electrical work that really make an impact on people’s lives.

Congratulations on 125 years of exceptional work.